Satanists are in full force causing accidents in Zimbabwe

Bulawayo prophet Madzibaba Mutumwa has started his tour of cities as he seeks to pray against the ravaging spirit of accidents that has hit the country of late. 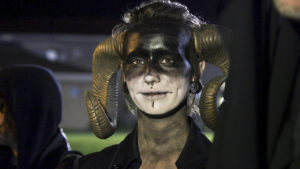 Concerned that in the past weeks, accidents have claimed more than hundred lives in separate road traffic accidents in the country, Mutumwa said the alarming rate of accidents was the work of satanists who have turned roads into death traps.

“Satanists are in full force causing accidents as they want blood for their satanism purposes. As a church we have started the tour of cities, the first being Bulawayo where we had a prayer at our Mganwini shrine. We are yet to release dates when we will be in Harare, before moving to Masvingo, Zvishavane and Mutare among others. I strongly believe that by the time we finish God would have intervened,” he said.

He invited transport operators and commuters to attend the tour of cities.

“May I take this opportunity to invite transport operators to attend these tours so that they will be prayed for, therefore be protected by the blood of Jesus. Members of the public have to attend as well,” he said.

Meanwhile, Mutumwa has been healing people who are mentally ill.

“One of the stories of a man who was mentally ill made screaming headlines in the media. The man had documents from Engutsheni hospital that certified him as a mentally ill patient. But after I prayed for him he got healed and stopped taking medication. He is now a devout member of our church,” said Madzibaba Mutumwa.

He also said people from as far as Britain, United States of America and from different parts of the world flock to his shrine for deliverance. He added that prominent people like politicians, businesspeople and the who-is-who of society also throng his shrine for prayers and deliverance.

Home owners and authorities of public institutions such as schools and hospitals have also hired him to conduct cleansing ceremonies after being terrorised by goblins.